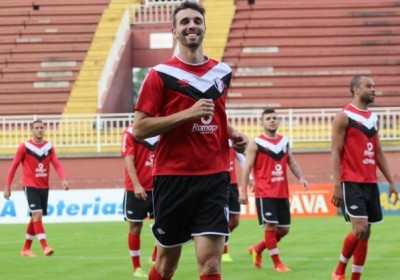 Valid in the twenty-fourth round of the Campeonato Brasileiro Série B, the Joinville Esporte Clube, defender Gutieri Tomelin (23) match, won playing at home to Atletico Goianiense team by a score of 2 × 0 and took the championship lead. Scored for Joinville Anselmo and the right side Edson Ratinho.

“It was my first game as a starter before our fans. I confess that it is much better to play than against the crowd of Joinville. Passionate crowd, which encourages staff and always attends the weight Joinville Arena. We played a good game, deserved to win now and keep focused on what is abjetivo take Joinville’s elite national football, “Guti said after the match.

The Joinville back on the field this Tuesday, September 23, where he faces the team of America / MG, 19:30 hours in Joinville Arena.